Safranbolu is a typical and preserved Ottoman town in the northwestern part of Turkey. With its cobbled streets, narrow passes and centuries-old houses, the town is a popular destination for tourists in Karabük. It had been on the trade route between Black Sea and big cities like Constantinople in 17th. Century. Accumulating enough wealth, local traders built beautiful mansions, not only in the town center (Çarşı – Bazaar), but also around the town (Bağlar – Vineyards) in order to have a summer treat since the hills are cooler. Currently, many of those mansions still operate as hotels hosting tourists in a traditional environment. 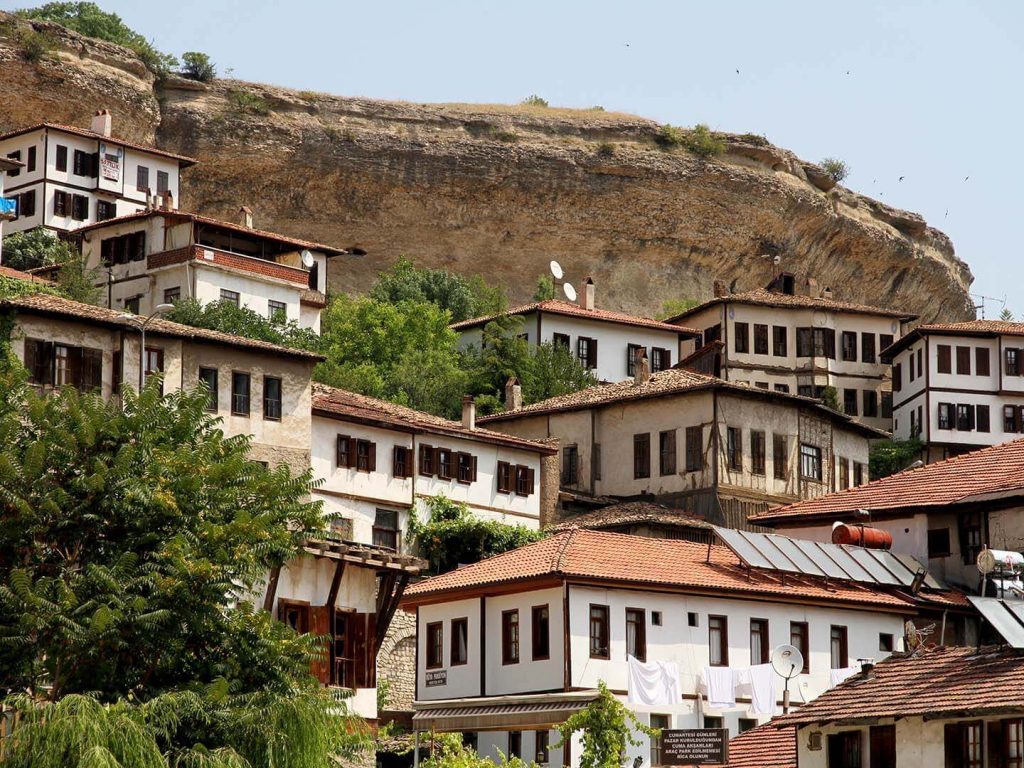 Safranbolu, Karabük. Houses do not prevent the view of each other.

Safranbolu town takes its name from saffron, where it is produced in high amount in the region. The town is listed by UNESCO as a world heritage site in 1994. When you visit the town, you will witness that the time has stopped a couple of centuries back, with its lively bazaar where saddle-makers and copper-beaters ply their trades, and local restaurants serve home-made food. 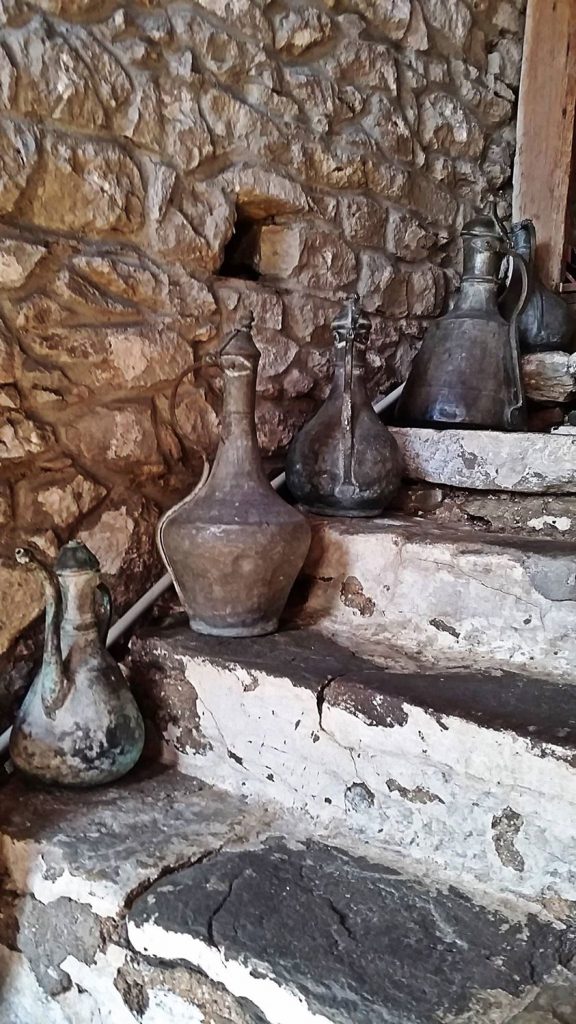 From “hayat” to upstairs through stone steps…

Safranbolu traditional houses were built out of wood and are mostly two or three-storeys, similar to other traditional houses seen in Anatolia. While building, each house was positioned in order not to prevent sunlight for the other one. To get an idea of what Safranbolu’s houses were like before their wholesale conversion into hotels you should start your day in Kaymakamlar Museum House, which is again, an old mansion converted to be a museum. This will give you an idea of lifestyle centuries ago.

The houses accommodate a cobbled courtyard where agricultural equipment could be stored and where the horses (of the old time) would be stabled. Those places called “hayat”, where you will spend your time meeting with new people in the mansions. Beware that you should take of your shoes while entering most of the houses.

While staying in the mansions, do look at the beautiful ornaments on the ceilings, carved with great craftsmanship. These decorations are called “göbek”. You can see some decorations on the walls as well. Haute couture furniture made of wood are actually the outstanding mark of the region, since forest population is dense. If you visit Safranbolu during the winter, the most popular location of a mansion will be the main room with fireplace. The architecture lets all rooms to possess small stoves beside of the fireplace, and the chimney system prevents the burnt gas to spread in the house, which is safe. Interesting item you will see in the furniture is that, once you open the doors of a big cupboard, you will face a private bathroom en-suite. And essential part of those big cupboards are lazy’s hole (Tembel deliği) which is used to put several stuff, when you are lazy to bring it to its original place!

Expect to see some traditional sofa (“sedir”) running around the walls of a room you breath. It was a tradition to spend time together, and at night sleep on your private room. Similarly, families had their meals together, by sitting on the floor and eating on a tray-like-table. Today, this tradition still goes on in Anatolia. 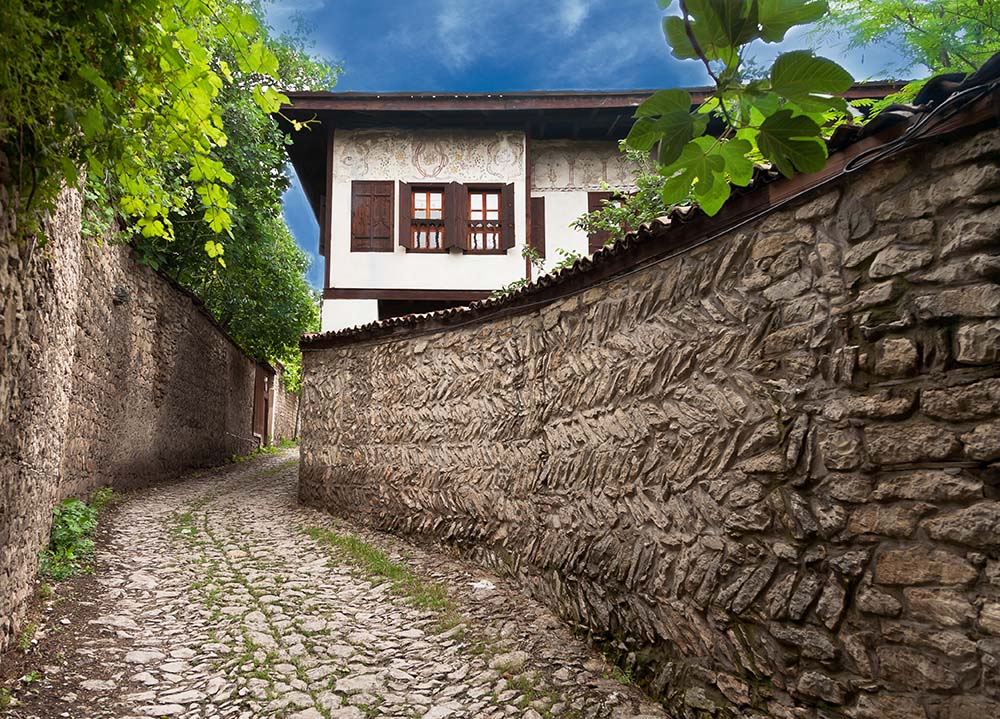 Narrow pathways lead to the hills of Governor’s House in Safranbolu.

Privacy is the other distinctive feature of traditional houses. The courtyards and gardens of those houses are protected by huge walls, to prevent sneaky eyes into the personal life. You may see some pools in the gardens as well, which will ease your tension with the beautiful sound of the water flowing.

The bazaar is still very active. Souvenir shops, as well as local craftsmen can be visited in the bazaar. When you are tired, try some local delicacies in a restaurant, which is owned by (mostly) the wives of the locals. Yemeniciler Arastası is worth visiting to see the markets of the old time. However, the town’s oldest craftsmen operate in secluded arasta near the Akçasu Canyon. There is an interesting mosque here called “Kaçak” (smugglers) Mosque, which is built on the road where smugglers used to operate. It has a river flowing beneath, which can be seen outside. 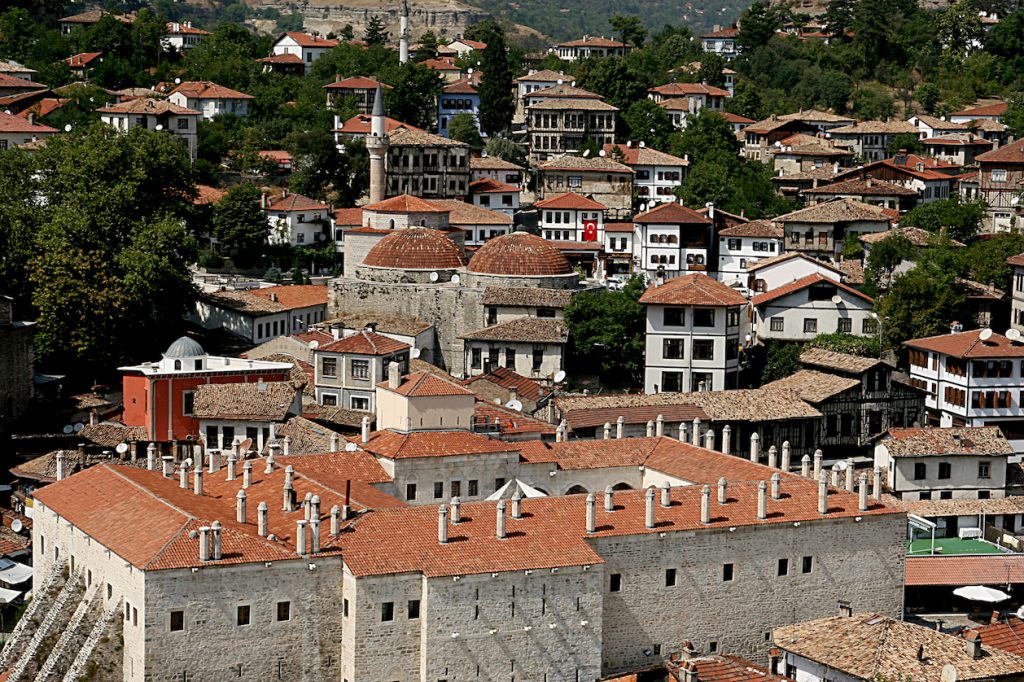 You can visit City History Museum (Kent Tarihi Müzesi) and Governor’s Mansion (Hükümet Konağı), on a steep hill, after visiting Clock Tower. There is an officer inside, who tells how this clock works (since 200 plus years!).

Cinci Inn, which was built in the second half of the 17th century, is an important work both with its historical texture and architectural structure. Being used as a hotel today, Cinci Inn has been one of the most important accommodation areas on the Silk Road for almost three centuries. The Inn takes its name from the innkeeper, Karabaşzade Hüseyin Efendi. There is also a Turkish bath annexed to the inn that is worth visiting for scrub and massage. 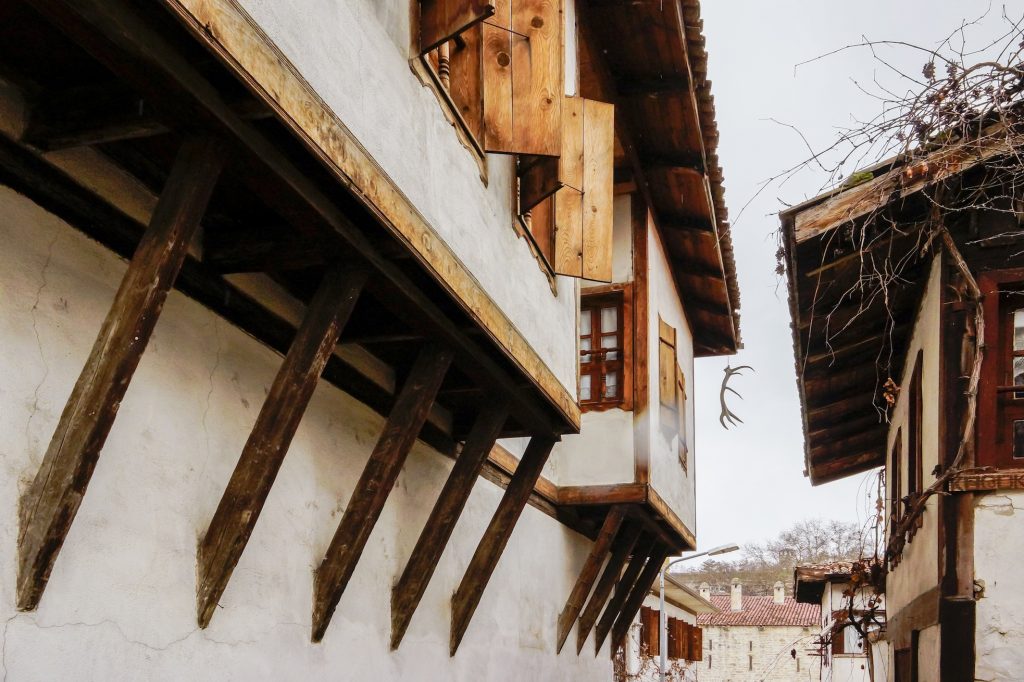 Famous vizier of Sultan Selim III, İzzet Mehmet Paşa was born in Safranbolu, and built a mosque in his own name on 1796. İzzet Mehmet Paşa Mosque is worth a look as it is a classical example of Ottoman mosque architecture. There is a tomb of him inside, but he is buried in Manisa. There is also Ulu Cami near the bazaar, which was converted into a mosque from a 19th century Greek Orthodox Church of St. Stephen.

Another work of Izzet Mehmet Paşa is the Incekaya Aqueduct. The 116-meter-long aqueduct is about 60 meters above the ground. The 5 arched sections of this large aqueduct are entirely made of stone and Khorasan grout. The Aqueduct is three folded in order to balance the flow rate of water. The water passing through here is distributed to the city, and you can see it in Asmazlar Mansion. This water is distributed among the public is called “pasha water”. While visiting the Aqueduct, you should visit Glass Terrace overlooking the Tokatlı Canyon, which is 80 metre high above the ground. 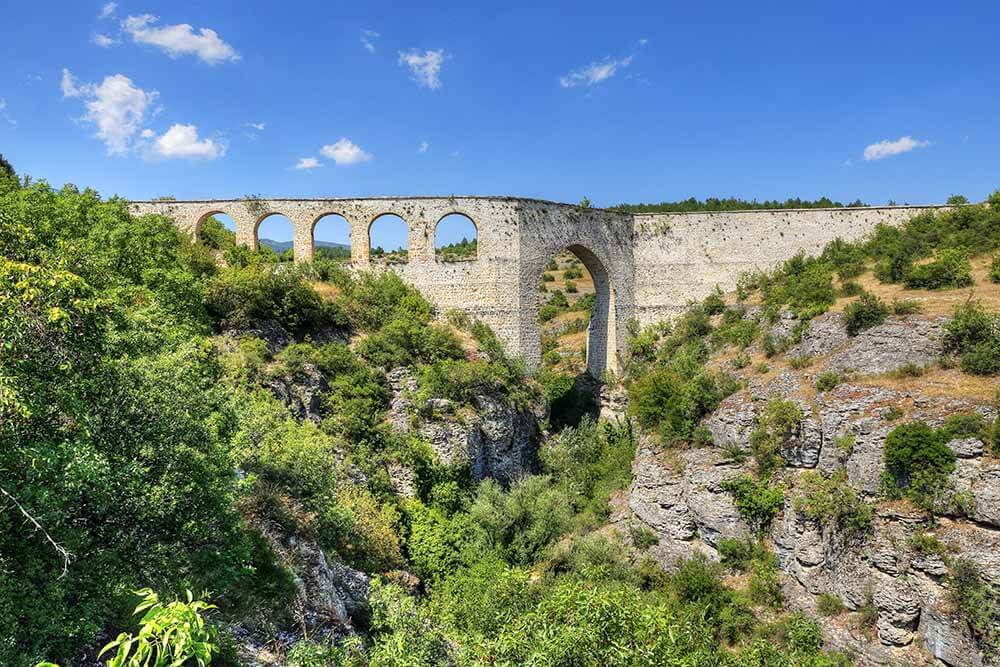 Districts around the Town

Under the pomegranate and mulberry trees, where everyone is greeted with a smiling face, Yörük Village is 6 km away from the town of Safranbolu. It is forbidden to enter Yörük Village by car. At the entrance of the village, you will see the cemetery as the typical Alevi-Bektashi tradition. The cemetery was built in this way for visitors to think of death even entering in such a chirping place.

Almost all of the houses in the village were built adjacent to the building. The house clusters along the street, which are frequently seen in Anatolian villages, are also seen here. 240 people live in 62 households of total 140-house Yörük Village. The oldest mansion in the village is the Onbaşıgil House, which is 450 years old! 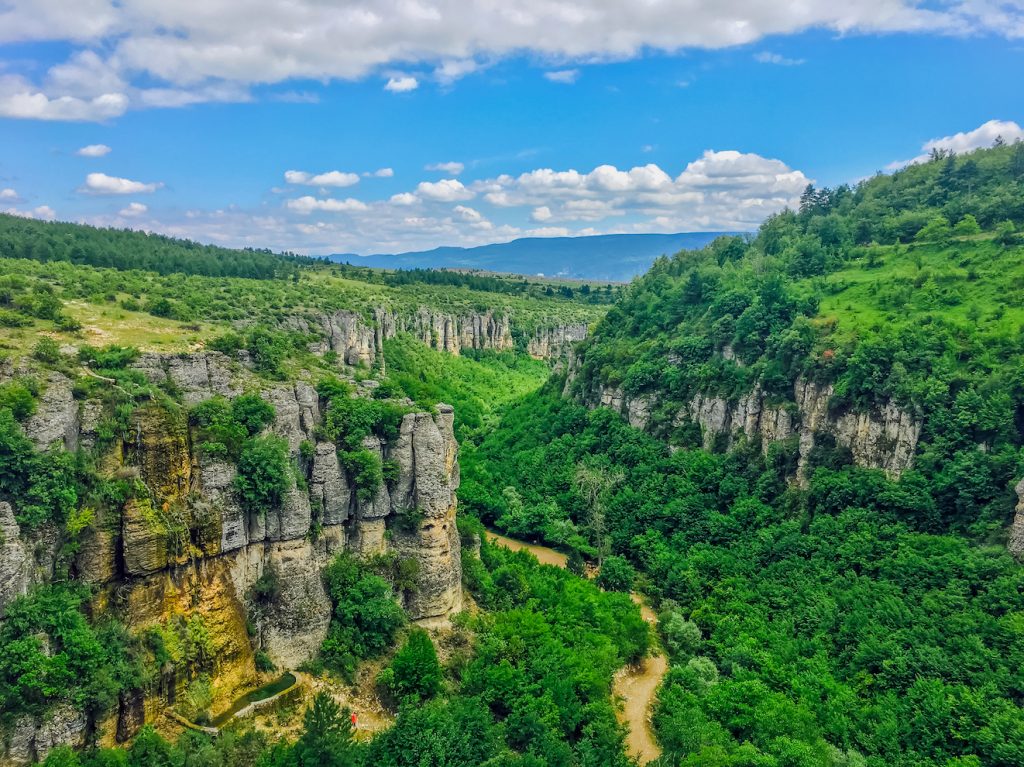 When you enter into the outside of the house, they appear almost identical to one another. It is not only the art of woodcarving, but decoration with figures you can see the meaning of each on the walls. Sipahioğlu House, one of the monumental houses in the Yörük Village, is used for sightseeing purposes only.

The entrance of Bulak (Mencilis) Cave is on steep rocks and the length of the cave is 6.5 km. 2.5 km part of the cave is covered and 380 meter part of it is opened to tourism. It is still a hydrologically active cave. The underground rivers, ponds and waterfalls attract the attention of researchers and visitors.

In Safranbolu, kuyu kebabı is specifically cooked for hours in the wells. You can dry a local dessert höşmerim, made from unsalted cheese and semolina; local halwa, and zerde with saffron. Also bükme pide is a spinach-filled covered pita baked in pit oven. 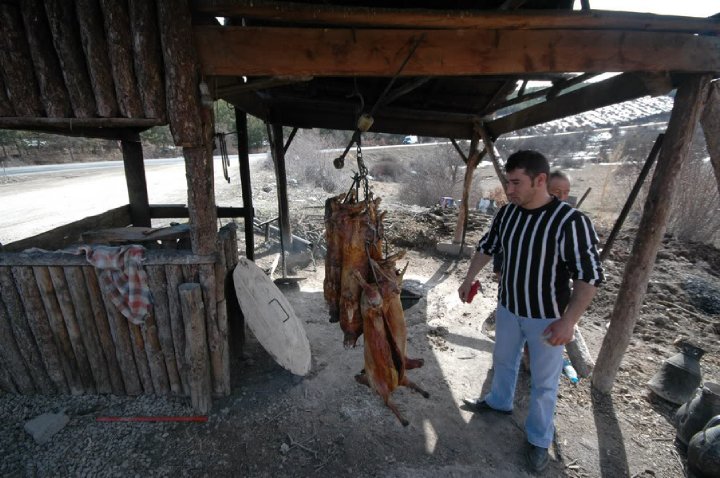 Kuyu kebab is made of mutton baked in an oven (tandoor).

In Yörük Village, taste delicious and authentic gözleme with herbs, spinach and cheese on authentic village restaurants. In the same way do not ignore the etli ekmek and baklava.

There are shared-taxis (dolmuş) going nearby places in Safranbolu during high-season. However, taking a taxi for a day tour is much affordable. If you afford to spend some more time, you can visit Valla Canyon, and Ilıca Waterfalls in Kastamonu which are 2 hours drive from Safranbolu. There is also Lake Efleni, which is 30 minutes drive.

Not enough? OK, hit the road to spend a day in Amasra!